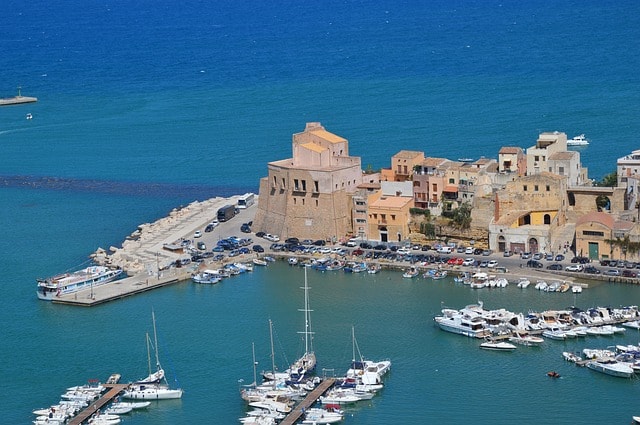 Sicily is an island in Italy that seats at the center of the Mediterranean Sea. The island is separated from the South of Italy by the strait of Messina. Its vast waterways are perfect for sailing.

The country has withstood different colonizers from the Greek Colonies and the Roman Empire in the 5th century AD to the Germans, Arab and Normans created a hodgepodge of architectural design and culture.
From the grandiosity of its structures to the active volcano to the turquoise water next to the pebbly beach, that is Sicily’s unique charm. Here is 7 days Sicily sailing itinerary prepared just for you so you can plan your sailing trip easily! The country has a Mediterranean climate which consists of hot and dry summer and mild and wet winters. The best time to sail in Sicily enjoying the rhythm of nature is from April to October. A great time to enjoy the country which is home to seven UNESCO World Heritage Sites.

Anchor in Marina di Villa Igiea in Palermo, the 2700-year-old capital of Sicily. A vibrant city full of rich history, culture and architecture right by the Gulf of Palermo. The grandiose architecture against the mountains is an amazing contrast in itself, organized chaos. Every nook and cranny of the island will leave you in awe and a delight to the senses.
Conquer your taste buds as you savor Sicilian cuisine that is better than anywhere else. From the Sicilian rice balls called arancini to the mouthwatering gelato and the infamous cannoli. A gastronomic experience you will never forget.
Spend a day admiring Palermo’s architecture and be amazed at how different foreign countries shaped the architecture of Palermo as we see it today. Be amazed at the Byzantine architecture of Palantine Chapel to the multi-architectural style of Palermo Cathedral to the Norman architecture of San Cataldo. Church of San Cataldo is listed as a UNESCO World Heritage site.

Palermo is a city that never sleeps so an overnight stay is recommended to see its beauty at night. Palermo may not have the famous clubs like the huge cities but who needs one when you can go down the town alley for some dance party.

After having a sumptuous breakfast in Palermo, sail away to the island of Stromboli. Watch nature in action as you see the 2nd most active volcano in Europe. Thus, the name “Lighthouse of the Mediterranean.”

Have your lunch at one of the restaurants that offer great food and an amazing view of the sea. Lounge by the beachside and be enthralled by its breathtaking sunset.

If you are at the adventurous side, explore Stromboli’s crate as the sun sets to watch the crater glow red and magma flows slowly down the mountain to the sea. Experience the eruptions up close and personal.

Anchor in Porto di Pignataro the following morning in Lipari. The island is the largest of the Aeolian Islands. Have a quick breakfast in your yacht before hiking the 16th century Lipari castle. The Lipari Town centers have several cafes and restaurants lined up to choose from. Stroll along the picturesque Marina Lunga and drop by the Church of Anime del Purgatorioto and the sea.

At the opposite side of the town are the 16th-century castle, the Cathedral of San Bartolome and some ancient Greek ruins. The town is small enough to wander around on foot. Never let the day pass without swimming in the clear water and sunbathing on the pebbly beach of Acquacalda. Stay for the night at Lipari before sailing to Vulcano, which is just within sight.

It is a small volcanic island at the southern end most of Aeolian Islands. Vulcano has been quiet since 1888 so it is safe to hike on top of the ashes and pumice stone.
Dock your yacht at Porto de Levante. Immerse in the splendid view of the island. On a clear day, you can see the other islands in the distance – Alicudi, Salina, Stromboli, and Lipari.

Mud baths are a must on the island of Vulcano. It is known to have beneficial properties such as curing asthma. If you are a fan of hot springs, then Vulcano is heaven for you. Swim in their famous “acque calde” or warm waters for that soothing experience. Last but not least, hike the Gran Cratere.

Depart in the morning to Taormina, the tourist capital of Sicily. Relish a one of kind panoramic view at the top of the Ancient Theatre, Teatro Greco. Stroll along Palazzo Corvaja (Corvaja Palace) built in the 14th century to see its hidden gem Naumachia, remains of a spacious edifice.

The town perched on top of the hill is charming with its old churches, bars, Michelin star restaurants, and shops. In the evening, anchor in Isola Bella as you enjoy its magnificent beauty.

Arrive in Syracuse early as the stunning city is one you should never miss. It is considered as the Greek Sicily and described as “the greatest Greek city and the most beautiful of them all” by Cicero. The whole city is listed as a UNESCO World Heritage Site.

Syracuse houses some of the infrastructures built for the gods such as the Temple of Apollo, Fountain of Arethusa, Greek Theatre, Roman Amphitheatre, and the Temple of Olympian Zeus. Notable churches in the Christian period like Cathedral of Syracuse, Basilica of Santa Lucia and Our Lady of tears can be found in the island.

Day 7 Back to Palermo

On the last day of yacht charter, it is always great to go back to where you started. What is an Italian city without its opera? Admire the grandiosity of the opera houses in Palermo such as Teatro Massimo and Teatro Politeama.
Another of Palermo’s landmark is Quadro Canti, which means four corners. It is an intersection that divides the city into its four historic neighborhoods. For the brave souls, drop by Capuchin Catacombs which has mummified corpses that can send shivers to your bones.

For the rest of the trip in Palermo, drop by their boisterous market to shop for some food and souvenir that’s truly Sicilian. Be entertained by the singing salesman trying to lure their customers. The Palermo market is one of the best in Europe.

The week that has past brought you back to the ancient civilization in an experience like never before. As you lay back on your yacht, a sudden realization came into view: sailing and Sicily share the same charm. Both exude beauty in the mishap. Sicily’s cultural diversity brought about by its long list of colonizers is like sailing amidst rough waves gives you a sense of tranquility and accomplishment.

Yes, I want to Sail In Sicily!

Other Articles to Read